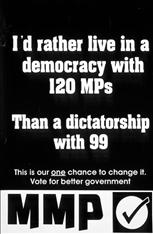 Last year New Zealanders voted to retain the current Mixed Member Proportional (MMP) voting system on the understanding that the Electoral Commission would carry out an inquiry into possible changes.

Every voting system requires trade-offs between a range of important factors, such as how well it allows government to be held to account, the stability and effectiveness of the governments it produces, its ability to deliver the outcomes voters expect, how well it represents geographic areas and interest groups, and the room it allows for opposition. Getting the balance of these factors right is important for the strength of our democracy.

New Zealand’s experience with MMP has shown some unusual results that could be adjusted to improve the balance of some of these factors. For example, our “threshold” rules lead to some strange outcomes at elections.

Currently, to earn a place in Parliament, parties must either win 5% of the party vote or an electorate seat. When they cross either of these thresholds, they receive a proportion of the seats in parliament, equivalent to the percentage of the party votes they won across the country.

This means that when a party wins an electorate seat, they may bring other MPs into Parliament with them, even if they did not win 5% of the party vote. A minor party could win just 3.7% of the party vote, but also win one electorate seat, meaning they bring four extra MPs to Parliament, while another party could win 4.1% of the vote and not gain any seats.

This scenario occurred in the 2008 election with ACT and New Zealand First.

We believe the one-seat threshold should be removed to prevent very small parties from having a large influence in government and to clean up election outcomes.
The number of electorate seats to list seats is another important consideration. List candidates are determined by the Party rather than voters. This gives more power to parties to determine who gets into Parliament and arguably makes MPs less accountable to the public as it is harder to vote specific MPs out of office. While List MPs play an important part in representing interest groups, electorate MPs are critical as they have a direct connection to and accountability from a specific group of voters. In the interest of producing accountable governments we believe it is important the number of electorate seats always be greater than the number of list seats.

We must carefully consider these and other issues being raised around MMP and to make suggestions about how we think it could best be improved.