A young New Zealander has just returned from Vienna after attending an international youth conference organised by the United Nations Alliance of Civilisations (UNAOC).

Arish Naresh, Team Leader (Oral Health Service) at the Tairawhiti District Health based in Gisborne, was among 150 participants from 50 countries (in the 18-35 age group) at the Fifth Global Forum held at the Austrian capital from February 25 to March 1, 2013.

He represented New Zealand at the week-long event held to encourage youngsters to discuss a number of issues including responsible leadership, religious freedom and migration (Indian Newslink, January 15, 2013).

There were more than 3000 applicants from all over the world out of who Arish was chosen to represent New Zealand based on his earlier work with NGOs and involvement with the youth sector.

Among the other factors that enabled him to be successful in the selection process were his work on multiculturalism, his role as the National Chairperson of the New Zealand Federation of Multicultural Youth Councils and Vice-President of Whanganui/Rangitikei Multicultural Councils.

As a part of the Multicultural Action Group appointed by Wanganui District Council, he organised a number of successful youth leadership forums in conjunction with the Social Development Ministry, New Zealand Police, Human Rights Commission and the Office of Ethnic Affairs.

Arish said that one of the first challenges as a participant was to provide a cost effective project that would enhance diversity.

“The theme for the Forum was ‘Responsible Leadership in Diversity and Dialogue,’ which fits in modern world where leadership is often based on ideological views rather than meaningful actions,” he said.

The programme included workshops, at which the delegates were asked to submit one question to the UN Secretary General.

The question posed by Arish was among the four selected.

“The web traffic over the week was more than 15 million on the social media page with about 3.5 million users tweeting or re-tweeting key messages. A number of ministers (including Ethnic Affairs Minister Judith Collins) and dignitaries were present at the Forum, at the end of which, the ‘Vienna Declaration’ was issued, containing several recommendations submitted by us,” Arish said.

He is justifiably proud of his selection to the Independent Panel for UNAOC Youth.

“The Panel will work with all participants on knowledge sharing.

“The next forum will be held in Indonesia and I hope to represent New Zealand again,” Arish said.

-With reporting by Arish Naresh 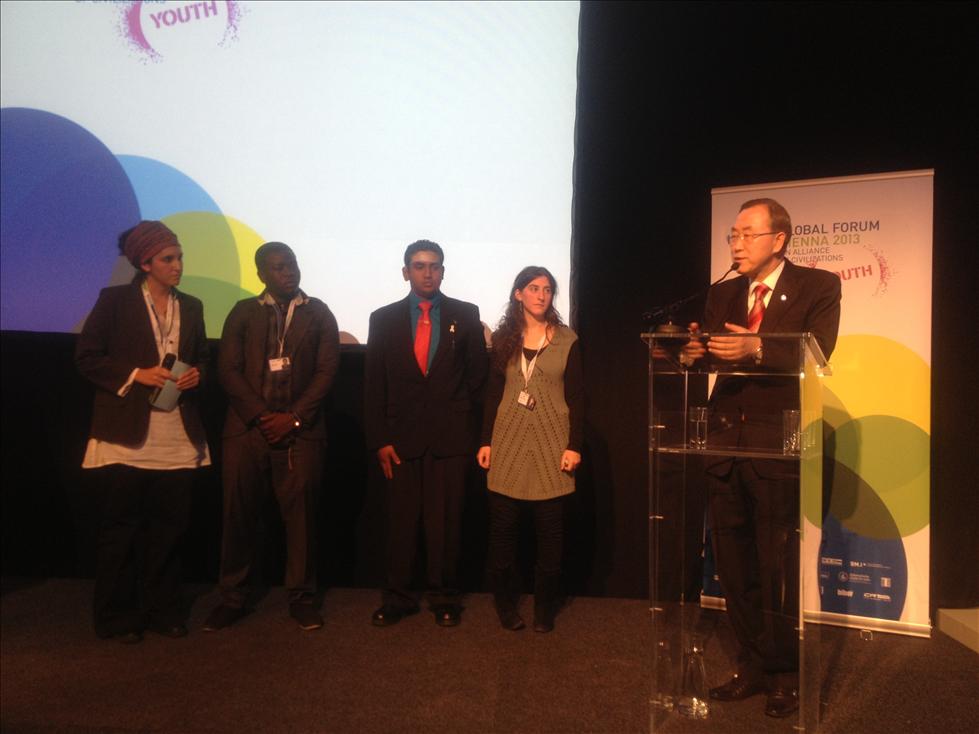 Arish Naresh (third from left) with his fellow delegates at the Q&A session addressed by Mr Moon.

Launched in 2005 upon the initiative of former UN Secretary General Kofi Anan, with co-sponsorship of Prime Ministers of Spain and Turkey, UNAOC works to counter forces that fuel polarisation and extremism.

Current Secretary General Ban Ki Moon appointed former Portuguese President Jorge Sampaio as his representative to lead the organisation based on the recommendations of a High-Level Group in November 2006.

Since taking charge in May 2007, Mr Sampaio has been working to develop a functional framework for action, in addition to setting an agenda and building a network of stakeholders.

According to a UN Development Declaration, the primary focus of UNAOC is to improve relations within and between Western and Muslim societies and address persistent tensions and divides.

“Respect and tolerance among human beings in the diversity of their beliefs, cultures, and languages are fundamental values at the core of the UNAOC. The Alliance aspires to the ideal of a culture of peace and dialogue, based on the conviction that “differences within and between societies be neither feared nor repressed, but cherished as a precious asset of humanity.”