Companies that have women on their management boards perform better with higher levels of productivity and profitability, an international report has revealed.

Credit Suisse Research surveyed 2360 companies all over the world to assess the value and extent of ‘Gender Diversity and Corporate Leadership,’ seeking to find answers to a single question, “Does gender diversity within corporate management improve performance?’

Credit Suisse Group Director of the Board (and former Academic Dean and Professor of Public Policy at the Harvard Kennedy School) and Columbia Business School (Paul Cello Professor of Leadership and Ethics) Professor Katherine Phillips were among the experts involved in preparing the Report.

Based on the answers given by the respondents, the Survey found that companies with women (one or more) on their management boards over the past six years, delivered higher average returns on equity, lower gearing, better average growth and higher price/book value multiples. 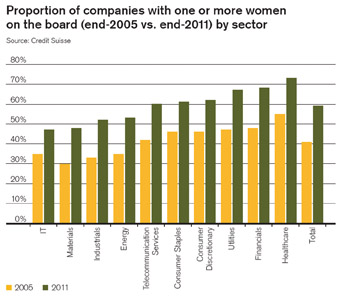 But it admitted that there was no proper explanation as to why gender diversity was significant in corporate performance.

“While the facts and data presented are objective, interpretation of the results carries more than an element of subjectivity. The Survey contains analyses of academic literature and interviews with experts on the topic,” the concluding Report said.

The research stated that many public bodies have become more vocal in supporting increased participation of women in leadership roles in the corporate world.

“Some, like the Norwegian government, have set mandatory targets; others have chosen to issue recommendations on board diversity. Ultimately, the trend towards greater gender diversity within management looks set to continue; and going forward will provide another metric for those scrutinizing corporate governance.”

According to the Survey, companies that had greater diversity on their management board experienced ‘reduced volatility,’ leading to enhanced stability in corporate performance and share price returns.

Stating that gender diversity within senior management teams had become an increasingly topical issue, it cited three reasons for the phenomenon.

The Report said that the low proportion of women on management boards is changing and that the percentage of women on the Morgan Stanley Capital International All Countrywide Index (MSCI ACWI) stocks rose from 41% as at the end of 2005 to 59% as at December 31, 2011.

“Government intervention in this area has increased. In the past five years, seven countries have female board representation mandatory target, while eight others have made it ‘non-mandatory target.’ Debate on this topic has shifted from an issue of fairness and equality to a question of superior performance,” the Report said.

If gender diversity on the board implies a greater probability of corporate success, then it would make sense to pursue such an objective, regardless of government directives, it added.

According to Catalyst, a US research organisation, Fortune 500 companies that have more women on their boards ‘tend to be more profitable.’

McKinsey & Company, another consulting giant, said in another independent report that companies with the highest percentage of women showed the best performance.

According to Credit Suisse Research, there was a clear split between relative performance during the years from 2005 to 2007 and performance following the global financial crisis (2008).

“In the middle of the past decade, when economic growth was relatively robust, there was little difference in share price performance between companies with or without women on the board. Almost all the outperformance in our back test was delivered post-2008, since the macro environment deteriorated and volatility increased. Stocks with greater gender diversity on their boards generally look defensive,” it said.