One of the most significant and inimitable aspects of the Sikh community is the spirit of solidarity and companionship that its members promote in every country of their domicile. Millions of Sikhs are spread across almost every country in the world, in each of which they are known for their enterprise, ability to blend with the mainstream population and most important of all, maintain and promote their traditional and religious values.

With the exception of Saudi Arabia, Gurudwars (Sikh place of worship) can be found in every city or village that accounts for Sikh population.

New Zealand can be proud of its Gurudwars for their architectural elegance and admirable piety. As well as being places of worships, these are also places for people to meet, greet, enhance knowledge, participate in sports and enjoy excellent food, cooked in-house. No one leaves a Gurudwar without experiencing the great hospitality and kindness of Sikhs.

For more than 120 years, Sikhs in New Zealand have been an integral part of the economy, the community and the society. Hard work, combined with piety and a concern for social progress has encouraged the community to be at the forefront of major activities and today, a number of associations and Gurdwars decorate the country’s social and religious fabric, lending a helping hand to the needy.

Most major cities have fostered associations and Gurdwars to promote the activities of the Sikh community. These exist in Auckland, Hamilton, Wellington, Christchurch, Bay of Plenty and in other areas.

The Gurdwar in Wellington is the southernmost Gurudwar of the world.

Sri Kalgidhar Sahib, located at Takanini in Auckland is one of the largest Gurudwars in the world. Owned and managed by the New Zealand Sikh Society Inc, tens of thousands of Sikhs and members of other ethnic groups visit the $8 million, 8.6-acre complex throughout the year.

Nanaksar Thath Isher Darbar in Manurewa and Sri Dasmesh Darbar (Auckland Sikh Society) in Papatoetoe are among the other popular Gurdwars in New Zealand.

Traditionally, a Gurudwar has four doors opening in all directions, symbolising the universality of Sikhism and that all are welcome. 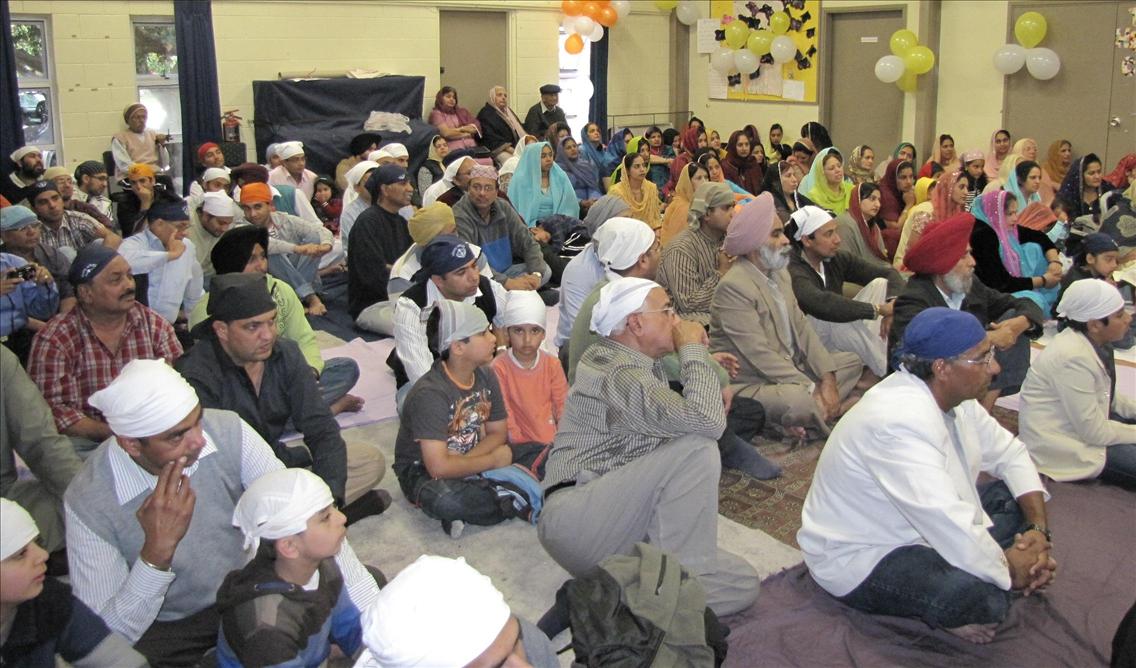 Anniversaries associated with the lives of the Sikh Gurus are marked as Gurpurbs (festivals). The birthdays of Guru Nanak and Guru Govind Singh and the martyrdom days of Guru Arjun Dev and Guru Teg Bahadur are considered sacred.

Gurpurbs witness the culminations of Prabhat Pheris, the early morning religious procession which goes around the localities singing shabads (hymns).

These Pheris generally start three weeks before the festival. Devotees offer sweets and tea when the procession passes by their residence.

The celebrations begin with the three-day Akhand path in which the Granth Sahib is read continuously from beginning to end without a break.

Conclusion of the reading coincides with the day of the festival. On this day, the Granth Sahib is carried in procession throughout the village or city.

It is placed on a float or a van strewn with flowers. Five armed guards, who represent the Panj Pyares, head the procession carrying Nishan Sahibs (the Sikh flag). Local bands are hired for playing religious music for the procession.

The Tenth Guru, Gobind Singh, was born on 2 December 1666 in Patna (Bihar). His Guruship is highly significant as he forged the distinctive identity of the Sikhs with five Ks and gave the name Khalsa (the pure) to his followers. His birthday in December is also marked by prayer readings, kirtans and processions.

The martyrdom day of the fifth Guru, Arjun Dev, is observed with prayers and processions. On this day, stalls are erected on roadsides (in some cities) for offering kachi lassi (buttermilk) to the thirsty passers-by to commemorate the death of the Guru who was burnt to death during the hot months of May and June. The ninth Guru, Tegh Bahadur, was beheaded in Delhi. His martyrdom day is also observed with prayers and processions. It occurs in the month of November.