Our Mothers always told us to speak the truth and not tell lies.

Is transparency just a fancy way of saying the same thing?

The concept of Transparency goes to the core of our beliefs and values.

We equate Transparency with truth, openness, accountability and freedom of information as a safeguard against corruption, fraud and nepotism.

However, one has to counterbalance transparency with the need to protect privacy, individual rights and intellectual property rights, trace corporate secrets and at a state level be able to conduct diplomacy and protect national strategic interests.

Transparency in fact makes us vulnerable.

The greater the power or influence we have, the greater is our vulnerability to be misrepresented, or misconstrued through the public and virtual media.

Therefore we manage our perceptions, as individuals or corporations to ensure that we are perceived as how we want to be, as opposed to what we really are.

We actually have to use a range of tools invented by modern society, spin doctors, Public Relations firms, and communications departments to deal with the perception game.

Is transparency therefore a myth?

In recent years, there has been a belief that transparency is good for corporations.

The belief stems from the assumption that corporates and the society benefit from letting shareholders, stakeholders and customers know more about how companies operate and what they intend to do with shareholder investments.

There is also a belief that corporate transparency is linked to corporate social responsibility.

However, faced with the realities of the market and indeed overwhelming challenges like the Global Financial Crisis, where continued survival of the organisation becomes an over-riding goal, transparency will often take a back seat. 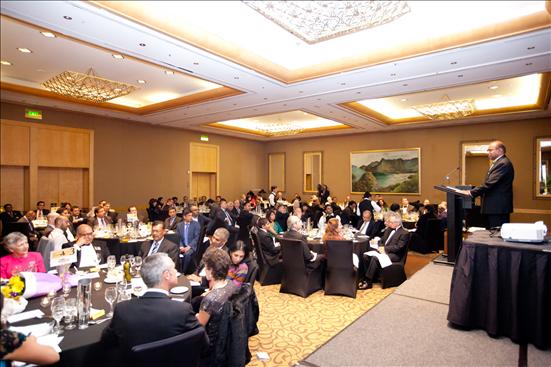 An interesting case study to illustrate was conducted by a Management Professor at an Ivy League University in the US. He repeatedly conducted this case study and came up with similar results.

The case study involved consecutive groups of MBA students who were asked to analyse a case where they were appointed to act as Chief Executive Officers and board members of ‘Pharma Company,’ selling a therapeutic drug.

The Company was aware of the side effects of the drug, which had adverse reactions and in some cases, death. The drug was a blockbuster and accounted for more than 50% of its profits. Withdrawal from the market would have certainly resulted in financial disaster, threatening the Company’s survival.

The students were given three choices: Do nothing; Contain and manage the media and slowly work out a strategy to either investigate the side effects or find other solutions to solve the problem; Immediately inform the Federal Drug Administration (FDA), withdraw the drug from the market and face the legal and financial consequences, including compensation to the victims.

More than 90% of the students went for the second option.

They were asked another question: how many of them would have taken this drug themselves or allowed their family to do so if prescribed?

The answer was unanimous. None of them said that they would.

This illustrates human behaviour when confronted with the choice of survival and ethical responsibility.

As a businessman and as a lawyer, I have often been confronted with the difficulty of operating in countries which have an accepted norm of paying so called ‘Consultancy Fees’ to intermediaries to secure contracts.

The dilemma is that if you do not agree to consulting fees to the intermediaries, you lose the contract. Whilst you may be tempted to pay ‘Consultancy Fees,’ which is essentially nothing more than a bribe, this is illegal.

To bring the point home, I am aware that there is a perception amongst New Zealand companies that in order to do business in certain countries to whom we export our goods and services, one has to tolerate or indeed turn a blind eye to such practices. At the same time, the same businesspersons would say this is not the way business can or should be done in New Zealand.

I do not accept that such bribery is either needed or be tolerated in our business dealings in overseas markets. I believe that it is still possible to do business without breaking the laws, and more importantly, sleeping well at night.

It comforting to know that in many high risk countries, there is a move towards increasing transparency with the advent of digitisation and technology, which makes fraud detection easier.

This risk of trading overseas was highlighted in a Deloitte Survey on Bribery and Corruption in Australia and New Zealand. The 2012 Survey covered ASX200 and NZX 50 companies.

According to the Survey, there are significant risks for those trading in these countries. These included (a) 34% of organisations operate in high risks jurisdictions (b) 21% had experienced bribery (c) 48% had not conducted a corruption risk assessment (d) 48% of the organisations did not have any formal policy or compliance to manage corruption risk.

It is therefore vital that Management and Directors are not complacent in assuming that they have adequate internal controls in place to identify and manage corruption risk, especially when trading overseas.

Sanlu was a Chinese joint venture in which Fonterra held 43% of its shares (in the Sanlu Group). It had three members on that Company’s board. The Sanlu board become aware of melamine in milk powder for six months but continued selling.

According to the New Zealand Herald, Fonterra’s board become aware six weeks before a public announcement was made.

300,000 Chinese children were hospitalised; six of them died.

Dr Anne Mary Brady of University of Canterbury asked, “What would have happened if those were New Zealand babies drinking poisoned milk?”

I do not think Fonterra would have sat on its hands.

It is a matter of corporate responsibility.

Vino Ramayah is the Executive Chairman of Medtech Global Limited and many other companies with offices in New Zealand, Australia, US and India. He was the Guest Speaker at the Indian Newslink Sir Anand Satyanand Lecture held at Stamford Plaza Hotel on July 29, 2013. Other excerpts from his Lecture appear in this Section, and under Businesslink and Viewlink.